At Bonnie’s, MSG Is Wielded with Nuanced Artistry

The claim that monosodium glutamate, or MSG, is inherently unhealthy has been thoroughly debunked—and dismissed, by anyone paying close attention, as thinly veiled racism. MSG, a salt that’s extracted from fermented crops such as sugarcane and corn, is used as a flavor enhancer in many Asian cuisines, but it also occurs naturally in foods including tomatoes and Parmesan cheese, accounting for the sensation known as umami. It’s as harmful as table salt, maybe even less so—it contains about a third of the sodium. Still, a stigma persists: I recently saw a Chinese takeout menu promising that the food was made without it.

That’s one approach a restaurant can take. Another is to flip the script. At Bonnie’s, in Williamsburg, the cocktails include an MSG Martini, made with a healthy shake of the seasoning, plus olive brine, Shaoxing wine, and vodka or gin. The L.L.C. behind Bonnie’s is called MSG 88, which was printed on egg-custard-yellow hoodies that the chef-owner Calvin Eng sold to commemorate his most ambitious offering, Yeung Yu Sang Choi Bao, a deboned and stuffed whole rainbow trout; like almost everything else on the menu, it’s enhanced with MSG. 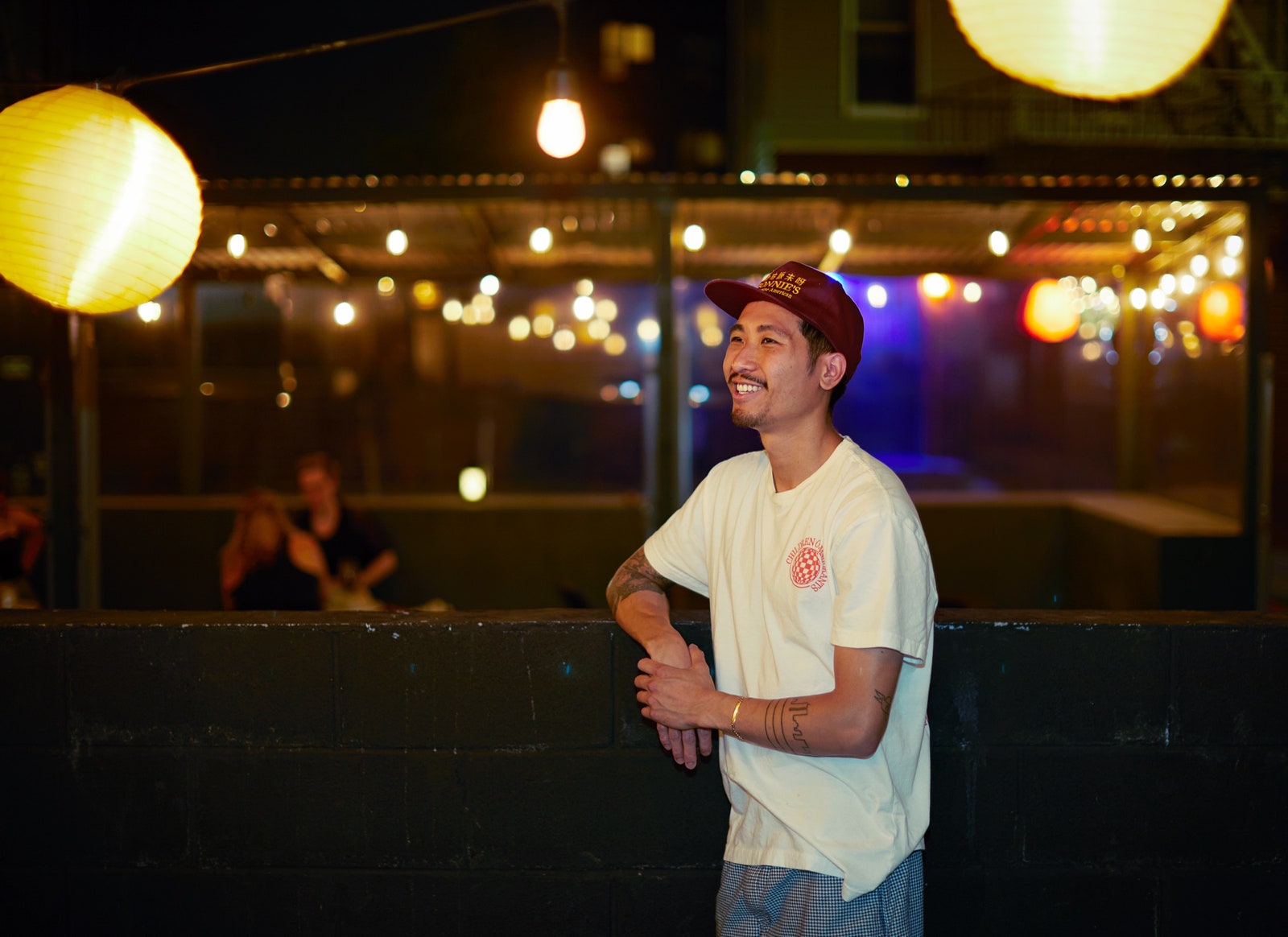 The chef-owner Calvin Eng, who grew up in Bay Ridge, named Bonnie’s after his mother.

And how! The food at Bonnie’s explodes with flavor. This is not to say that the kitchen leans too heavily on MSG (except, I’d argue, in the case of the Martini, which reminded me of A.1. steak sauce). In the grand tradition of Cantonese cooking—which Eng first learned from his mother, Bonnie, who was born in Guangdong and raised him in Bay Ridge—the Bonnie’s team wields it with nuanced artistry, taking no shortcuts. The steep price of the whole trout (fifty-three dollars) reflects the scrupulous effort it requires, which Bonnie herself undertakes only twice a year: bones and flesh are removed, the latter ground with shrimp, garlic chives, and water chestnuts and whipped into a paste that acquires the bouncy texture of a fish ball after it’s encased in the trout’s painstakingly preserved skin and cooked on a flattop grill.

The finished product gets sliced into (the lucky number) eight neat segments, to be wrapped in lettuce with herbs and a ginger-scallion purée. A poached half chicken, Bak Cheet Gai, is also sliced, fanned cold atop warm rice, glistening with golden chicken fat, and served with teacups of Gai Tong, or chicken broth, redolent of ginger and white pepper. “Sip it as you eat or dunk it to take away the chill,” my server suggested. “I love this liquid!” my dining companion announced as she sipped.

The Cha Siu McRib is available in the restaurant and also on the takeout-and-delivery menu, which is called McBonnie’s.

I loved this liquid, too; on another evening I ordered a whole teapot of it. I used it as a palate cleanser between bites of long beans—delightfully sweet and shrivelled, positively clanging with garlic, and topped with croutons made from a kind of savory cruller often served with congee—and bites of scorching-hot Cheung Fun, seared rolled rice noodles that were sticky on the outside and custardy within, the concentrated fishiness of XO sauce (from dried scallops and shrimp) punctuated by notes of fennel seed.

Another specious claim about MSG and Chinese American food, in particular, is that you can’t eat it without getting hungry an hour later. I wanted to repeat my Bonnie’s meals in short order not because I was mysteriously famished but because I longed to reëxperience the pleasure. Good luck to me: booking a table in the boisterous dining room (my fruit plate came with a round of shots, one night) requires Sisyphean effort on Resy. That said, the bar and an outdoor seating area are reserved for walk-ins, and if all else fails there’s McBonnie’s, a Golden Arches-inspired menu for takeout and delivery. The regular menu’s phenomenal Cha Siu McRib, featuring a half rack of boneless steamed ribs, pickles, sharp Chinese mustard, and onions on a sesame milk bun, suffered slightly in transit. Not so the McBonnie’s-only Filet-o-Fish, a perfectly bevelled square patty made from the same mixture that’s stuffed in the whole trout (at a third of the cost), topped with preserved mustard greens and a slice of neon-orange American cheese. (Entrées $17-$53.) ♦

Previous : The Invention of the Trans Novel
Next : Sadio Mane: How will forward fit in at Bayern Munich? The view from Germany…